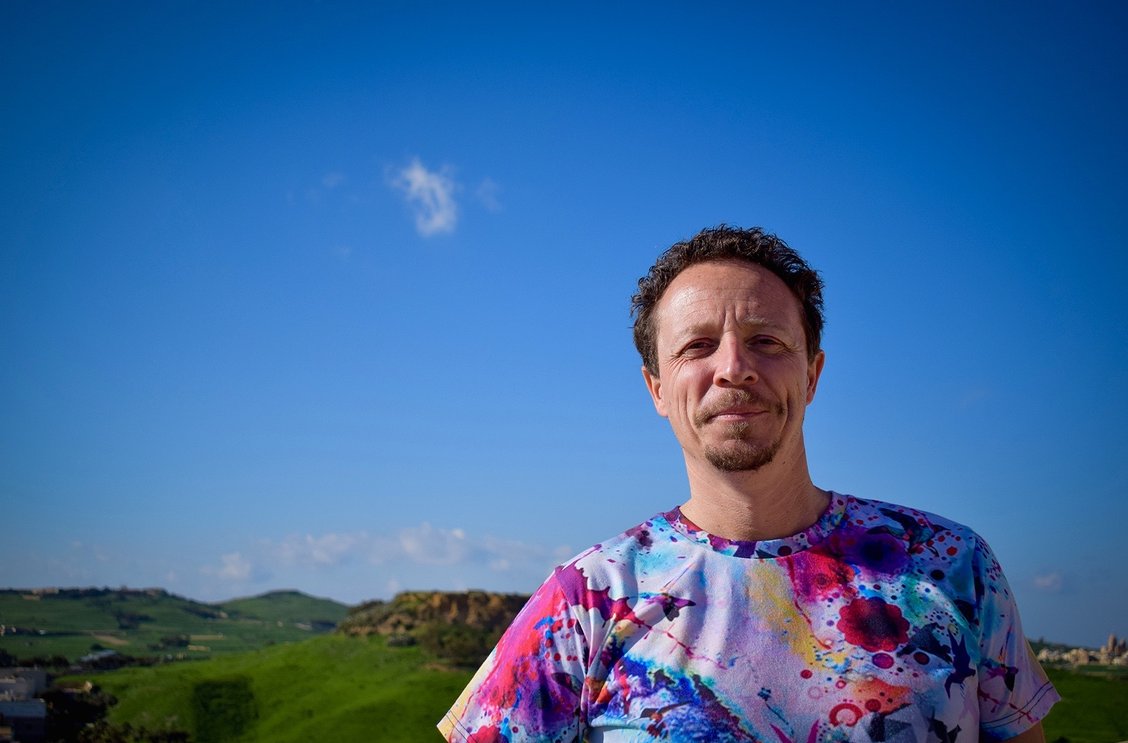 When Ralf came into this world the first thing he saw was the orange wall of his parent’s cozy bedroom. It was 1972, Eindhoven, the Netherlands. His father worked as a salesman and his mother as a secretary. Soon after, they moved to a nice big house on the Wattstraat. As a baby, Ralf traveled to the then undeveloped Benidorm in Spain. He had a friendly and relaxing early childhood. He got a sister, what a blessing and what a love.

One grandfather was a pioneer of package vacations, and the other grandfather was interested in yoga, IChing, detox and metaphysics. During the week of Ralf’s state exams, this grandfather did a “Moxa” herbal treatment on Ralf’s feet to relax him, which was great and helped Ralf pass his tests.

At the age of 8, Ralf stared at his hands and knew that someday he was going to do something with them. He was interested in dinosaurs and the evolution of mankind. He started to write and to take pictures. Ralf had a strong desire to live in a castle and to be in the forest. A desire which would be fulfilled many years later when he moved to a large house in the Swedish countryside.

When Ralf was 16 years old he was part of a tight group of friends. His first travel adventure on his own was to Barcelona. In a youth hostel there, he met hitchhikers, and having just finished Adam’s Hitchhiker’s Guide to the Galaxy, Ralf realized hitchhiking was an excellent way to see the world with a great sense of freedom.

He worked on tulip farms and in restaurants.

Ralf moved to Paris, studied, but the romantic artistic appeal of the city was too strong and he was more often found near the palace in Versailles writing poetry, then in school. He greatly enjoyed his freedom, living in a small attic room with a view of L’Arc de Triomphe in the distance. He finished a project of pictures of Everyday Life in Paris.

He completed two years of communication and film studies at Emerson College in Maastricht; an important and transformative period in his life. Great fellow students. Parties. Interesting courses. He studied Comparative Arts at VU university in Amsterdam. He lived in Amsterdam, but quickly moved back to Maastricht, really stretching the free transportation card issued to students, as he traveled 5 hours by train every study day. With friends he formed an artistic/musical group ’Circle Around the Zero’. He hitchhiked to Scotland to see if the monster of Loch Ness was there (it wasn’t), and hitchhiked to the Syrian border. He became interested in spirituality. He founded the communal living apartment ’The Flying Carpet,’ which was a great creative space for many people. Better late than never, through a friend who would become his best friend, he met a young woman and fell in love. He moved with her to New Orleans where she studied anthropology. That was a treasured period in his life. Audubon park. Mardi Gras. The bright colors. The mist over the Mississippi River. The majestic houses. Friendly people. He wrote stories. He met people in the coffee houses in the French Quarter. The love ended, but full of life and spirit Ralf went to live on kibbutz Nir Yitzhak, Israel, where life was like paradise to him.

Then followed a six month trip to India, where he meditated for the first time in his life, under the Bodhi tree in Bodhgaya, which he afterwards realized was a great and auspicious place to start meditating. In India he also started to do yoga. At the end of his stay, full of experiences with spirituality, religion, and Indian culture, he contemplated on the beach of Varkela what he should do now. The unexpected answer was ”live in Nijmegen or The Hague, and work in a bookstore”. And so in 1999 he settled in The Hague, a city where he had never been, and started to work in the American Book Center, which he really enjoyed.

Together with a good friend he was invited to a wedding in Thailand and he loved the country, its people, its culture and its food. Before boarding the plane back home he got a Thai massage in one of the many places in Chiang Mai, a little run down business with a fan slowly turning on the ceiling. It was an experience which set in motion a long train of fantastic events.

Back in the Hague his apartment became an open creative space. His friend recorded the album “Nan,” and many friends came and stayed over. Ralf had girlfriends. It was a nice period which abruptly ended when his mother, who lived in The Ivory Coast at the time, suddenly died, followed by his stepfather three weeks later. Emotionally shaken it took a long time for him to get over this. He quit his job, left The Hague and in 2001 he went on a year-long trip visiting Provence, La Gomera, Finland (invited on a road trip by friends), Eastern Turkey, New York and Washington DC. At the end of the year Ralf embarked on a long trip to Thailand and Laos.

After meeting a friend from New York in Bangkok, Ralf woke up one morning and thought “what the heck am I going to do with my life?” The answer came swiftly: “Study Thai massage. You liked that massage so much.’ And so he moved to Chiang Mai and started studying at Mama Nit’s massage school.

One morning a young woman came into the school. She noticed that class was going on and went back outside. Patiently, she sat down with her back to the wall, with the sun shining on her face. When class was finished she enquired about the studies. Ralf knew she was “the one.” A few days later, after a hike up Doi Suthep where she and her best friend sang songs, Ralf and Annica kissed in the Reggae Bar. They found great love and companionship.

Annica and Ralf traveled to South Korea and Japan, ate soups, sushi, the best nourishing food ever, bathed in onsen, watched waterfalls in Aomori, visited Sado island, Kyoto and Eihei-ji. In Tokyo, and in a temple near mount Fuji, they stayed with Hojo San, the great Zen master, singing karaoke with him and meeting geishas. For the last day of their trip Hojo San treated them to a room on the 20th floor of a luxurious hotel, and there they sat in the window pane gazing out over Tokyo, just like in the movie “Lost in Translation.”

In 2003, Ralf and Annica decided to move to the Swedish countryside, and they started the Thai massage business Mitt i Boda. Their first son was born and a year later their second son. These were fantastic years. So much love and happiness!

They opened another practice in Falun, and for several years they studied Shiatsu. Ralf is incredibly thankful to his teachers for their instruction, and to all the people he has treated over the years.

Throughout the years Ralf became more and more aware that he had a gift of knowing what area to give attention to when he gave a physical treatment, and since 2014 he started offering Energy Healing and Distance Energy Healing, without touching the physical body. In 2012 he closed Mitt i Boda and MIB Falun, and started to give treatments everywhere in the world.

Ralf lives with his family in the Swedish countryside, envisions having or sharing a house in Fiji, and travels around the world.

In January 2020, for the second time, he did a silent meditation retreat at Dipabhāvan in the Koh Samui jungle, Thailand. So wonderful, so warm, walking silently with other people in front of the Buddha statue, and in the morning doing sitting meditation in a hall illuminated by candle light.

Afterwards he traveled to Samma Karuna on Koh Phangan, where he had a life-changing experience. In just a few days he rediscovered in himself things he had forgotten: The joy of dancing. Love. New ways of breathing. About being a child. During this stay he met people who were open, loving, hugging, practicing yoga, meditating, who desired to expand, to learn, who showed their vulnerabilities, who cared, and who nourished their bodies with delicious vegetarian and vegan food.

Ralf is thankful for the work of people like Deepak Chopra and of scientists who study Quantum Physics. Recently, the writings of ancient traditions, the work of Healers throughout time, and modern physics all agree that everything IS energy, and anything can change, either by yourself (self healing, focus, visualization, attention and intention), or with the help of a Healer. This way everything is possible, anything can change and anything can be changed. It is beneficial if one is in a meditative state when working with Energy Healing, receiving it, or understanding how it works.

Ralf passionately believes that his vocation is to give Healing Energy treatments.

You are very welcome to book a treatment!